Disney has optioned Awkward for a made-for-TV movie!

Here’s the fancy press release with all the details:

Los Angeles, CA; New York, NY – October 23, 2012 – The Gersh Agency in Los Angeles today announced that The Disney Channel has optioned the teen novelAwkward by Marni Bates to be made into a television movie. Awkward is published by Kensington Books’ KTeen imprint in New York.

Awkward is a romantic teen comedy featuring a girl whose embarrassing moment is captured by her high school classmates and goes viral on YouTube. Suddenly dubbed “America’s Most Awkward Girl”, Mackenzie Wellesley soon finds herself dodging both the paparazzi and the popular girls at school, even as America’s hottest boy rock band, ReadySet, transforms her moment of humiliation into a hit music video! But when Mackenzie’s rise in notoriety only pushes her farther away from the guy she’s falling for, she’ll find out just how steep the price of fame can be…

“Marni Bates brings a youthful breath of fresh air to young adult novels with her delightfully humorous, yet authentic portrait of high school life. We know Disney viewers will be as charmed as her legions of readers,” said Alicia Condon, Editorial Director, Kensington Publishing.

Marni Bates recently graduated from Lewis & Clark College and has four YA novels under contract with Kensington Books’ KTeen imprint: Awkward and Decked with Holly are currently available, with Invisible and Notable coming in 2013. She also has penned a nonfiction teen book with HCI called Marni.

Brandy Rivers of The Gersh Agency in Los Angeles who brokered the deal said, “Marni is hands down one the greatest new voices in YA and we are thrilled that this is going to be a fabulous new movie for the Disney Channel!”

About Marni Bates
Marni Bates is the author of four young adult books for Kensington Books KTeen line of teen novels. She also penned an autobiography entitled Marni. She grew up in Ashland, Oregon and currently lives in Los Angeles. When not writing, she can be found rollerblading, drinking frappuccinos with extra whip, reading romance novels, and watching copious amounts of TV—strictly for artistic inspiration, of course.

About The Disney Channel
The Disney Channel is a cable and satellite television network owned by the Disney-ABC Television Group division of the Walt Disney Company headquartered in Burbank, California. The channel specializes in television programming for children through original children’s television series and movies, as well as third-party programming.

So as you may be able to guess I’m completely geeking out right now. I mean, this is kind of…well, one of the biggest things that has ever happened to me.
Which is why yesterday I pulled on my Disney boxers and marched right over to the Hollywood sign. 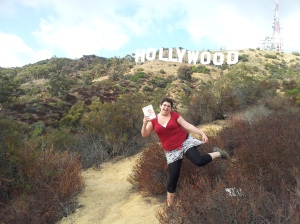 I needed to remove myself from temptation because it’s hard keeping secrets from you!

I can’t express how excited I am about this movie deal. And how grateful I am to have so many wonderful people cheering me on through this process. I need to give one ridiculously large thank you to my agents, Laurie McLean and Brandy Rivers, who made this happen. They’re both completely composed of awesome!
I also need to thank, well, you!
Thank you for enjoying my books! Thank you for wanting me to write more of them! Thank you for telling me that you think it would make a great movie! (Fun fact: whenever I received that comment I would happy dance and consider trying to forward it to a Hollywood executive. Probably a good thing that I didn’t…)
Thank you for all of your wonderful words of encouragement!

I can’t properly express just how much it means to me. I’m at a complete loss for words.

So how do I plan on celebrating this awesome news?
With massive quantities of Starbucks and a new YouTube book trailer for Decked with Holly, of course! And this one will also be a stop-motion animation completely created by yours truly. To see the book trailer I recently edited click:
So keep checking in to see the final project! I’m hoping to have it finished soon.
Thanks again, everyone!
Sincerely,
Marni