Continuing my mad year of traveling, I am currently sitting in Denver’s airport waiting for my flight to Houston.

Denver from the air still looks pretty when you’re running on no sleep.

And not just because United Airlines has made me jump through more hoops then a dog in a circus act.

For the record though: GRAWR!!!

When the coffee cart lady tried to deny my (perfectly legit) voucher at 5:30 this morning, airport security nearly had an incident on their hands. Which probably wouldn’t have bothered TSA one bit considering that they had just chosen me as their surprise target for a security check. I bet they would’ve shaken their heads and muttered something about knowing I was suspicious from the very beginning.

Although how crazy do you have to be to deny someone caffeine at 5:30 am?

Freakin’ nuts, if you ask me.

Except the Coffee Cart Lady was not this cute. She was snippy.

Anyhow, it worked out in the end. You know, except for the fact that my first flight was canceled and then I was booked with a five hour layover in Denver that I then turned into a two hour layover…which United then never confirmed.

Speaking of encouraging: lot’s of good stuff has been happening for me lately.

If you follow me on Twitter (hint, hint) you probably already saw the link that KTeen came up with to promote their upcoming line of YA fiction titles.

But for all of you who aren’t already  following me, here it is: finditem.cfm?itemid=19942

There are no words to express how excited this made me.

Which might explain why this happened a few days later…

Those are the final copy-proof pages of AWKWARD! And I was freaking out the second that I saw that Mr. FedEx’s (ahem) package came from Kensington…so I didn’t let him leave. Not until he agreed to this photo shoot.

A lot of people have told me that it is considered strange to start hugging strangers. However, when a gentleman flat-out says that he has a package just for you…what does he expect will happen?

And, yes, I find these package jokes hilarious. Just go with it.

Anyhow, I forced myself to ignore the copy-pages of AWKWARD and to finish writing the rough draft of FAUXMANCE so that I could feel all accomplished and successful before I left Ashland. Except I had no idea how much writing that actually entailed at the time I checked out the calendar, nodded my head and said: game on!

That’s how I ended up writing 64 pages in four days. I even set a new personal best by writing 29 pages the night before I was supposed to fly out to Houston.

And typing the final paragraph made me feel invincible. Although, that could have been the copious amounts of caffeine in my system talking because about two hours later I crashed.

Which brings us back to me, standing at the airport, gaping at the United guy and stuttering, “Wh-what do you mean I can’t fly out of Oregon? I don’t understand. I FINISHED FAUXMANCE, I SWEAR!”

He doesn't believe me so he's just walking away.

The amazing thing is that even though flying to Houston was one long, stressful ordeal…the situation paid off big time. My aunt proof-read AWKWARD for me, which was perfect since I wouldn’t have caught the nit-picky details that she noticed.

For example: turns out there is a difference in meaning between discrete and discreet. I was using the wrong one.

And while I started this post in Denver, I have now officially arrived in Houston. I’m enjoying my cousin’s air conditioning right now, as a matter of fact.

Okay, I’ve been anticipating the Willamette Writers Conference for a long time now. I used it as a reference point on the horizon when I was struggling with homesickness in Australia. I could flip open my agenda and point to the first week of August and know that I would find people there who would understood me. 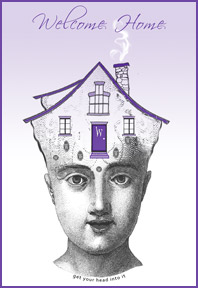 There’s something about being surrounded by other people who also see people who don’t exist that I find…comforting.

Which might sound funny since The Sixth Sense scared the hell out of me.

Haley Joel Osment and I both must like pens way more than pencils.

I was so excited to go this year that…well, my enormous grin never faded.

And when I got there I was allowed to hang out in the VIP room with all the agents! Unfortunately I didn’t snap any pictures of it (I was trying to play it cool) but it looked classy to me. Well, definitely by college standards. No PBR here.

It was all fancy french cheese and crackers.

I can actually report back every single dish on that table because I was that determined to absorb every detail. Which sadly includes the baby corn, olives, and spinach and polenta squares.

But I’m guessing you guys don’t care about any of that.

So here’s something you might like to know: the WWC attracted some of the coolest people I’ve ever met. Seriously. I could not have asked to spend my time with a nicer, more interesting group of agents, managers, producers, oh, and writers!

So typically I was already in the wee small hours of the morning before I called it a night.

And that’s why I drank copious amounts of coffee throughout my panels. 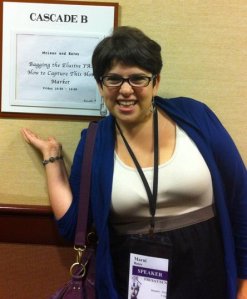 I had so much fun! I love giving advice to other writers. And I love talking about YA fiction. Nothing else I’d rather do.

Now this is where you probably want to hear the details…but I’m too tired to go into it. I thought I had the energy when I started blogging. All of it drained out of me though. There are just too many of them for me to even know where to begin.

However, I am thrilled to announce that one of my very good friends now has an agent. Way to go Katherine! It really can/does happen, people!

Anyhow, the conference has made me seriously consider making some huge changes, like moving to LA and trying to break into TV.

On the one hand: terrifying.

On the other hand: thrilling.

I guess we’ll all have to just wait to see what happens. In the meantime, I need to get back to work on my books for KensingtonTeen, fly to Houston and finish college.