Skip to primary content
Skip to secondary content
Hey everyone!
It might surprise some of you to hear that I’ve gotten a reputation in Australia for being morbid. At first I thought it was unwarranted. I’m an absolute optimist. I’m the girl on the bus who merely smiles as the baby shrieks—and not because I’m imagining ways to shut her up. I choose to be entertained rather than annoyed. But my fellow classmates know that if we in any way discuss the seedy underbelly of society, I’m going to have some questions.
Okay, a lot of questions.
They thought it was funny when I asked our first lecturer if selling Aboriginal artifacts on the black market has the potential to make some serious cash.
They smiled indulgently when I asked our tour guide about how brothels were organized at the mines.
They shook their heads when I asked which creature in the mangrove swamps posed the greatest safety hazard.
And they traded knowing looks (and a few groans) when one particularly brave lecturer said that he welcomed all questions. No need to raise hands. Just shout them out.
So . . . yes, sometimes the screaming child and I both need to keep our mouths shut. I openly admit it. But I only ask questions when something captures my imagination. Once that happens I just have to know. Even if it means asking museum curators how the security of certain objects could be compromised.
I know! I just can’t help it.
So yesterday when I asked the museum expert if the Aboriginals wore anything particularly comfortable, it wasn’t meant to be awkward. It was just that . . . no way could dangling a humongous shell to cover up certain bodily bits be comfortable. Which explains why it was ceremonial and not for lounging. I understand now.
But apparently while I was pointing to the piece that had ahem, captured my attention, a member of my group pointed out the obvious:
“Marni asks the most awkward questions.” Beat. “I probably shouldn’t have said that out loud.”
To which my teacher responded, “Oh no. That’s what all of us were thinking.”
Which . . . okay, fair enough. My questions are weird. I get it.
And I wasn’t mad or offended when I heard about it. I’m sort of used to it, to be honest. I’ve heard a similar sentiment expressed throughout my life.
Except back in high school . . . and middle school . . . and elementary school I desperately wanted to blend in. If I could have swapped my life for someone else’s I would have done it. Absolutely. I probably wouldn’t have wanted to trade back. See, no matter how hard I try to act normal, I have always been the odd duck. 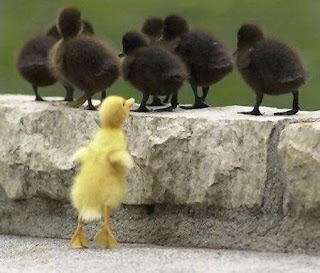 I’m the square block that looks at the round hole and says, “Um . . . not to be critical, but you know you’ve got the wrong piece, right?”

Even in elementary school. I was the one kid who couldn’t tie her own shoes or read a clock. And I could never figure out the stupid game where you hopped from state to state on the blacktop outline of the U.S. because the rules kept changing. One day it was “don’t step on the orange states” then it was, “don’t step on the states that start with a vowel!” But mainly it was, “Marni, what are you doing? That’s not how you play!”
Elementary school had its share of rough social moments. People who look back to the simpler times and sigh must have been the cool kids on the playground. When you are the square peg, no matter how many adults supposedly love your “pegginess” you generally feel like crap. I used to fall asleep every night berating myself for my daily social faux pas until I cried. So . . . maybe it’s a fair assessment to say that I’ve always been a bit different.
And while I like to think I’ve grown smarter, stronger and more articulate with age when it comes to some things I’m still the kid who can’t figure out the hopping game. I still don’t know how to be anyone other than myself.
The difference is that now I’m 92.7% okay with it. Instead of crying over my social mishaps, I laugh. I pull the covers over my face, squinch up one eye and smack my forehead in amused disbelief. Then I pull out my laptop and imagine what would happen if one of my characters said a similar thing only worse!
My awkwardness, the thing I always thought would hold me back, has actually allowed me to make a living doing what I love.
I’m a square peg and I can’t fake it. I’m always going to want to know about heists, assassination attempts and evil genius plans. It’s the way I’m built. So if any of those things make me “morbid” (characterized by or appealing to an abnormal and unhealthy interest in disturbing and unpleasant subjects) well, okay.
But what other people see as an “unhealthy interest in disturbing subjects” I find fascinating. And I will always choose to be intrigued instead of bored. So to all my fellow pegs: hang in there. At some point you’ll look at that stupid round hole and realize that slinking down with the others actually sounds pretty dull.
So before I leave this blog and find some other way to procrastinate on my research paper (The City Built on Gold: The Boredom Story. I mean the “Ballarat” story . . .) I want to wish my sister a very happy birthday. I thought this shout-out might make up for the fact that (as my brother so elegantly put it) I’m stiffing her again this year. But maybe not. Oh will you look at that! I’ve got to go.
Sincerely,