I debated whether I wanted to share my 4th of July photos with all of you.

Part of me was like, “Um…Marni? You’re going to the Romance Writers of America conference soon! You want to be taken seriously. Maybe you should, you know…not share everything.”

And then I realized that everyone who reads this blog already knows how geeky I am! So my parade pictures aren’t exactly going to come as some big shock.

I mean, if I wanted to hide my high geek quotient…I probably shouldn’t have shared my  “idea notebooks” here.

A sneak peek at Decked with Holly! That’s Dominic Wyatt on a cruise ship. That’s right: he’s on a boat.

Plus, I totally posted about the time I forced the UPS guy to take a photo with me. To be fair, he was handing me the copyedits for Awkward…

And he was never to be seen again.

Probably because I don’t tend to stalk mail-carriers.

Then there was the time I spent 12 straight hours in the Lewis & Clark computer lab creating these:

I still look back at that night fondly. That whole month, actually. Roughly 94% of the Lewis & Clark people I shared them with, loved it. The other 6% placed bets as to when a cease and desist/ restraining order would be issued.

But I like geeking out with all of you. So here it is: 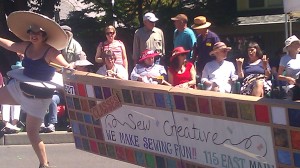 Yep. I was the “Dancing Spool of Thread” in the Sew Creative parade entry. You can’t tell from the picture but I was wrapped in blue yarn to emphasize, you know, my spool-iness. 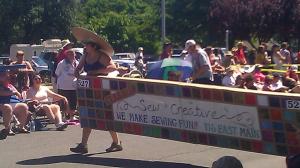 I’d like to take this opportunity to point out that it is not easy to dance with a huge cardboard circle around your waist. And that when I absent-mindedly imagined running into old high school classmates, it was not bedecked as a spool of thread.

But I earned so many daughter points.

So it was worth it.

Anyhow, I hope you all had a wonderful 4th of July!