The spin-off sequel to Awkward comes out on Tuesday, September 25th.

It doesn’t feel real yet.

In fact, it feels decidedly unreal. And I know I should be more familiar with the concept by this point. I wrote a book, sent it to my editor, banged my head against a wall a few thousand times and voila! It hits the shelves!

(Not an accurate depiction of the writing/publishing process. Obviously. Since I left out roasting marshmallows over candles at 2am when I get stuck. Oh, and my unbelievably awesome support group. Y’all know how much I depend on you!)

But it still amazes me to think of my book, sitting on bookshelves, waiting for super awesome people to read it!

Especially because this book holds a very special place in my heart. Which is not to say that I love my other books less (Oh wow, I have a whole lot more sympathy for my mom now. Having her children demand to know which one of us she would save from a burning house first must have been obnoxious. Hint: it would be me) but this one is extra special.

I was packing for my flight back to Oregon after spending the past three weeks in my cousin’s little apartment near Rice University in Houston, Texas–when I got The Call. 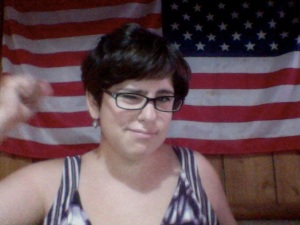 Marni doesn’t quite know how to blend in Texas.

Honestly, if I was in the middle of a mugging and my super agent Laurie McLean rang me up, I’d probably give the muggers the can you hold this for a moment finger and answer the phone.

Um, I think it’s pretty obvious from the photo why I believe she has super powers…

As it was, this particular situation was a lot less dramatic. Even if I did suspect that the humidity in Houston was trying to smother me.

“Hi Marni, I just got a call from KTeen” SuperAgent Laurie said and I instantly brace myself for the news that every copy of Awkward has been destroyed in a freak natural disaster.

“They want to know if you would be willing to write a spin-off holiday novella.”

At this point in the conversation, I distinctly remember happy dancing like a demented chicken and squawking, “YES! Yes! I’ve never written a novella before but I am in!”

“Great. I will email you everything they just sent me and then . . . oh hang on. They want a spin-off novel.”

The demented chicken dance stopped. Probably because it felt like my heart was no longer functioning properly and all that blood was going straight to my head.

“Actually, they want it released between Awkward and Invisible.”

This is when I started pressing buttons on my phone, convinced that I had misheard her and that my crappy cell phone was to blame.

“But I’ve already written Invisible,” I blurted out.

I could practically feel Laurie smiling patiently on the other side of the phone. “I know. That’s why they want this to be a spin-off.”

“It could be anyone.” Laurie pointed out. “Maybe one of the rockstars?”

Laurie waited patiently for me to make my point.

“I’ve never written from a male point of view before! I definitely can’t write a whole novel that way!”

One of my SuperAgent’s most impressive powers is the ability to make me believe that I can do anything. I don’t know how she pulls it off, but when I’m on the phone with her I am willing to agree to just about anything.

And four minutes later I was calling my mom and freaking out.

“I don’t know what I just agreed to do!” I confessed sheepishly. “They asked the Jewish girl to write a holiday novel?! Do you think I should tell them this? Because I refuse to write a Christmas miracle. And no way is Hanukkah Harry coming down a chimney to save the day! Do you hear me, Mom? THERE WILL BE NO HANUKKAH HARRY!“

I made this point–rather loudly, I admit–in the airport and found myself on the receiving end of a more than a few funny looks.

Looking back, I’m just lucky that airport security didn’t consider this un-American sentiment and try to interrogate me about it.

Okay, I’m lucky for a whole host of reasons. I’m eternally grateful to KTeen for allowing me to write Decked with Holly the way I felt the story needed to be told: with two alternating point of views and no Hanukkah Harrys.

And to my SuperAgent, friends and family members who tolerated my Christmas in July tactic.

A special shout-out to my mom who must have stumbled upon me listening to the Pomplamoose version of Always in the Season three hundred times.

This book may have scared me at first but it was an absolute pleasure to write.

I fell completely in love with a certain rockstar drummer and enjoyed every second I spent in his head. I don’t want to spoil the ending but he does something that made me go all melty inside.

I want to discuss it with people soo badly! 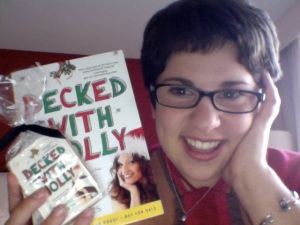 So if you want to buy a copy of Decked with Holly you can do so quite easily here:

And if you also want to click the “like” button, I know for a fact that the author will do a demented chicken dance.

You also might want to read Awkward (if you haven’t already) because it will make Decked with Holly even more exciting for you. That said, I promise you don’t have to read Awkward to completely understand what is happening to Holly and Nick.

Then again, with the awesome discount price of $2.99 for Awkward now is a really good time to get it. 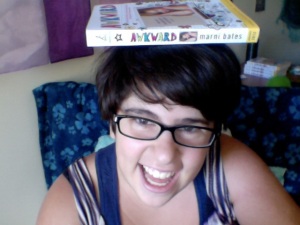 Awkward is clearly still on my mind…

Anyhow, once you read the books I sincerely hope you will tweet me with your thoughts. I absolutely love hearing from people! Oh, and whenever I get fan art I call up every single member of my family and I brag about it to them.

One time someone messaged me that I was tied as her favorite with Justin Bieber and I geeked out.

Watch out, Biebs. I’m stealing your fan base!

My point is that I really do love to hear from you so I hope you’ll consider tweeting me at:

Or you can message me using my Facebook fan page:

I will absolutely see your messages in these places!

And if you feel like leaving comments on Goodreads, I probably will be too confused to respond but I will do my happy dance.

I have even bigger news coming your way soon so . . . I should probably stop writing before I give it all away.